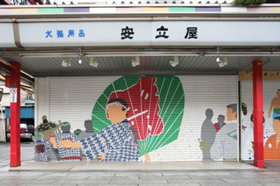 The Bunka Shutter Company of Tokyo manufactures a wide range of building and housing materials, including shutters, doors and partitions. The company was established in 1951 and enjoys a high reputation in the Japanese construction industry.

Shops need heavy shutters for security before and after business opening hours but these shutters are usually very drab and devoid of any visual attraction. The Bunka Shutter Co Ltd, in conjunction with the PR Consulting Dentsu, devised a scheme for making shop shutters visually pleasing and adding to the attraction of thelocality.

The objectives of the scheme were threefold:

1. to improve the attraction of shutters;

2. to provide a framework for depicting the art and culture of the local community;

3. to be capable of publicising communal anniversary events and announcing local activities

The rationale for this ambitious scheme was the desire to see the Asakusa district regain its former eminence which had become eroded by the attractions of the newer districts of Ginza, Shibuya and Shinjuku in the western sectors of Tokyo.

Asakusa was chosen as the site of the project. This area is well known at home and abroad as a tourist centre boasting such attractions as the imposing Kaminarimon Gate and the shops along Nakamise Street.

As one of the objectives was to promote the art and culture of the local community, motifs appropriate to the area and the Nakamise shopping district were selected. The scenes depicted on the scrolls illustrate features of the district reflected in the traditions of the common profile through festivals, markets, customs and habits retained from the Edo era. The actual Asakusa Picture Scrolls project was made up of the following items:

1. Location and scale. The shutters are about 2.3 meters high and up to about 360 meters along the Nakamise shopping street.
Four scrolls depict the traditional culture of Tokyo’s Asakusa district.

2.The theme of each scroll depicts Asakusa’s seasonal events and characteristic sights enjoying long traditions.
The themes shown on the scrolls were:

– The Sanja Festival. This is one of Tokyo’s major festivals. Sanja is a harbinger of summer.
– Hozuki (Chinese ground-cherry) Fair, a summer event featuring market booths lined up in the grounds of the Sensoji Temple.
– Ukiyoe-genre paintings expressing the life of the common people in the Edo era.
– Dances of a golden dragon and a white heron – elegant dances handed down at the Sensoji Temple.

3.The actual production and supervision of the scrolls was executed by 16 members of the teaching staff of the National University of Fine Arts and     Music. Professor Sawato Fukui headed the group which was supervised by Professor Ikuo Hirayama, world famous for his ‘silk road’ painting series. He is now president of the university. Each of the four scrolls averages about 10 meters long and is painted in Japanese style with delicate color tones appropriate for expressing the traditional Edo period culture.

4. Bunka Shutter Company was responsible for putting the final design of the pictures onto the shutters. This was achieved by applying the pictures to the shutters with a new ‘Marking Film’ method. After the delicate color tones of the Japanese paintings were analyzed into 64 different colors, the pictures were magnified 10 times and copied onto 80micron vinyl chloride sheets, which were then attached to the shutters.

5.The whole project took over a year to complete and as the various stages of the work were reached, the media were kept fully informed of developments. The response of the print and broadcast media was continual and enthusiastic and finally very congratulatory when the completion of the Asakusa Scrolls was announced.

6.Since the pictures appear on the shutters, they can only be seen after the shops close at 8 pm. Moreover, all the scrolls cannot be seen from any one vantage point because they are 360 meters long. To make up for these inconveniences, a number of commemorative souvenirs were produced. These included an Asakusa Picture Scrolls Calendar, picture postcards of a selection of the scrolls and framed pictures.

The main objective was to revitalize and popularize the area. This was achieved without doubt by this imaginative scheme. Japanese as well as foreign tourists have flooded the area to view the scrolls, despite the late hours. The shutters have triggered a new sightseeing boom that is leading to a more extensive revitalization of the whole Asakusa district.

The cultural influence of the shutters has also been noteworthy. Professor Hirayama has remarked: ‘The street itself has become an art gallery. Utilizing space in this way is epoch making. I am very happy to have been able to take part in this project’.

The media summed up the project thus:’ A fantastic environment has been created. This should serve as a guide for the cultural city of Tokyo in the new age’.

The Asakusa Picture Scrolls project was awarded a special prize by the Japanese Society of Commercial Space Designers in the 1989 Commercial Environment Design Grand Prix. This project also won the 1991 Golden World Award from the International Public Relations Association in the Art&Culture category and was introduced in International Public Relations Case Studies published in 1993 by Kogan Page Limited. In the book, editor Sam Black discussed the project as follows:

“This is a remarkable example of a very imaginative idea carried out successfully with the help of many different groups who had to be enthused sufficiently to win their support. This case study could equally appropriately have been classified under the ‘Community Relations’ section of this book, as the successful completion of the project has undoubtedly made a massive contribution to the welfare of the local community.”

He added “The contrast between a street of closed shops with drab shuttering, compared with the same street ablaze with color and artistic beauty is breathtaking and is a concept that Japan can be proud of. Its nearest comparison is probably the fairly new custom of British contractors to use the boards round major construction sites to apologize for any inconvenience caused and sometimes to incorporate a modest amount of advertising. The building of special windows in the screening to allow passersby to watch the work in progress is another public relations device which has considerable merit. These simple but effective ways to seek favor with the people passing a site, pale into insignificance compared with this remarkable initiative of bringing an art gallery into the streets. It would not have been possible without the remarkable technical achievement of reproducing the delicate color tones of the paintings onto thin vinyl sheets.”