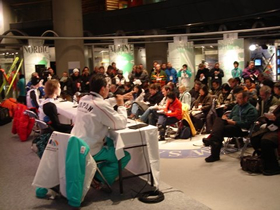 2007 marked the first year that the Nordic Word Ski Championships were held in Asia. The event was hosted in Sapporo, Japan from February 22 to March 4, 2007, and PR Consulting Dentsu’ media relations team played a key role in managing this world championship ski event, second in size only to the Olympic Games.

Hundreds of reporters from around the globe flocked to Sapporo to cover the event. To meet the needs of the media, press centers were setup in five locations in Sapporo, which ensured the delivery of timely information to reporters and provided them with sufficient space to work.

PR Consulting Dentsu was in charge of running the press centers and worked behind the scenes aiding in the overall management of the event. After each competition, reporters would head to the press centers where they would work on their stories. Time differences between Japan and reporters’ home countries often lead to late-night reporting. Our dedicated team also worked into the night assisting the press in their battle against jet lag and tight deadlines.