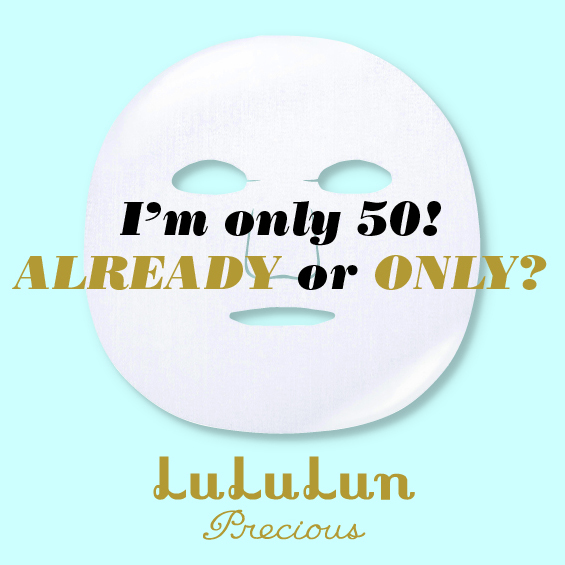 This campaign to promote anti-aging skincare face mask Lululun produced by Glide Enter Prize, focused on the subtle difference implicit in a simple choice of words when talking about one’s age: “only” and “already.” The aim was to encourage women to think positively about their age by investigating the relationship between an optimistic outlook and youthful appearance.By combining scientific research with the testimony of real women, the campaign garnered widespread media coverage, helping sales reach 234% of the previous year’s total, and contributing to an increase in the number of Japanese women prepared to think positively about their age.

A leveling in sales signaled that it was time to approach a new demographic: women in their 40s and 50s. As this segment is highly discerning when it comes to skin care products, communications had to go beyond simple promotions. Glide Enter Prize launched the “Precious” line of Lululun in December 2015 targeting these women in Japan.
We wanted to increase the number of women in their 40s and 50s who think positively about their age with the additional aim of increasing the number of consumers who think positively about this product, and thereby boosting sales.

We discovered that women who were more positive about their age had measurably younger-looking skin. The average skin age of respondents who used “I’m only…” was as much as 7.1 years lower than those who used “I’m already…”Through our campaign, we wanted to surprise women with this fascinating data.

80s teen pop star Iyo Matsumoto changed the lyrics of her original hit song “I’m only 16” to “I’m only 50,” and the new song was featured in TV commercials, released as a single, and featured extensively at events at shopping malls and in in-store displays around Japan.

The product name Lululun was chosen to evoke a sense of youthful exuberance, and the product­­ – though high quality – was launched in a price bracket that appealed to younger women. However, a leveling in sales signaled that it was time to approach a new demographic – women in their 40s and 50s – and as this group is highly discerning about skin care products, communications had to go beyond simple promotions.

The most impressive aspect of this campaign was how many Japanese women began to perceive themselves differently. The positive public response to our survey’s unprecedented findings encouraged women across the country to think more optimistically about becoming older. Follow-up online surveys indicated that the proportion of 50-something women who saw themselves as “only 50” rather than “already 50” increased massively from 25.8% to 52.3% after the launch of this campaign.

By combining scientific research with the testimony of real women, the campaign garnered widespread media coverage, and was featured on 19 TV shows, over 2500 tweets, and 446 websites, including Yahoo! Japan News and grape, Japan’s most popular social news site.
This campaign helped Lululun’s sales for 2015 to reach 234% of the previous year’s total. One rival cosmetics firm was even moved by Lululun’s impressive sales to release a similar product. However, Lululun remains the top selling cosmetic face mask in Japan.