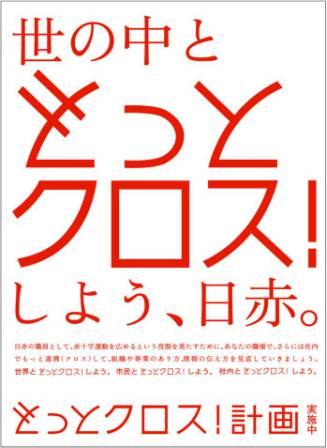 Having failed to effectively publicize its activities for a number of years, the Japanese Red Cross Society (JRCS) was in desperate need of a communications overhaul. In response to this challenge, PRCD’s “Spirit of Togetherness” campaign focused on utilizing the JRCS’s key asset, its 62,000 staff, as PR communicators, to great effect. Not only was the organization’s public profile significantly boosted, with a fivefold increase in earned media placements over five years, but communication between the hundreds of JRCS facilities was vastly improved. The large scale, innovative nature and impressive results of this project make it an outstanding candidate.

The Japanese Red Cross Society is one of the largest and most active branches of the global Red Cross network, running a total of 442 facilities nationwide, including hospitals, blood donation clinics, child welfare and elderly care centers. While providing a precious, sometimes life-saving service, the JRCS is largely sustained by generous contributions from ordinary citizens who donate money, blood and time as volunteers to help others in need. However, over a number of years JRCS management had observed a marked decline in contributions that it felt was occurring because insufficient emphasis had been placed on communicating its messages to the public. Moreover, as the society’s traditional image was deemed unattractive to the younger generation it was struggling to broaden its donor base. Meanwhile, the organization’s large scale inhibited collaboration with external partners.

Although the organization’s financial resources are limited, its most valuable resource is its huge workforce of 62,000 people. Thus, when PRCD was approached by the JRCS to enhance its communications capacity, it was soon established that the JRCS employees themselves would play a central role. Given the size and diversity of the organization, the task was undoubtedly challenging – to significantly increase the JRCS public profile, judged in terms of media placements, and hence boost donations, through a reformed communications structure.

An agency survey of around 2000 JRCS employees was conducted in March 2007, with a range of questions focusing on views and experiences of the organization’s internal and external communication. This found that over half (53.8%) of employees were dissatisfied with JRCS internal communication. At the same time, 20 employees across various facilities were interviewed on a one-to-one basis to obtain more detailed insights. Furthermore, surveys of around 2000 members of the public, conducted annually from 2007, as well as annual focus groups consisting of 30 people, found that people in their 20s and 30s were particularly unfamiliar with the nature of JRCS activities.

The project aimed to establish stronger internal and external communication systems that required employees to have enhanced PR skills. Harnessing the energies of staff would produce a far more sustainable PR capacity for the JRCS than were it to rely on conventional advertising. By making everyone working for the organization into an effective PR communicator, the project should be able to generate the media attention that had previously been lacking. The importance of engaging with the younger generation was emphasized, and employees were encouraged to collaborate with local media, businesses and other organizations. The aim was to bring the wider community closer to the JRCS, and in doing so raise the organization’s profile, with increased mentions across multiple media platforms.

The crucial first step was to ensure that JRCS executive officers understood and supported the important role of communications. The agency would then hold workshops across Japan so that all staff acquired basic communications knowledge and skills. Finally, it would ensure that these best practices were shared among all facilities. This would create an institutional culture of learning from each other and reinforce cooperation among a wide range of sectors. The original Japanese name of the project, “Motto Cross” (literally, “more cross”) had a double meaning which embodied its two main objectives – to enhance the level of cross-communication between the organization’s various departments and to raise the profile of the JRCS nationwide. The English version of the campaign name was “Spirit of Togetherness”. The “Motto Cross” logo featured the name in an eye-catching red and white design, consistent with the Red Cross’s own logo. It was used prominently on posters, alongside slogans urging employees to “tell your stories” and engage our membership.” The logo also appeared on folding pocket-sized “kick-off cards” handed out to all employees at the time of launch, which contained a message outlining the project philosophy and objectives on the inside, and subsequently on “mission statement cards,” 10,000 of which are given to new employees and volunteers each year. Since 2007, the agency’s communications experts have traveled the country conducting annual interactive workshops, to help staff at various facilities to improve their communications skills. A total of 30 of these were held in 2012. The diverse content of these sessions spanned how to take good photos, to the basics of producing effective printed materials. For more experienced or management-level staff, the sessions focused on how to devise a sound communications strategy and engage more effectively with the local and national media. The resulting enhanced PR capacity gave rise to many unique and inspiring communications projects, including a theme park where children could experience the work of the Red Cross, a picture book based on the true story of a child survivor of the tsunami, and a soccer game in which professional players coached children whose lives were saved through blood transfusions.

At the end of the year, as has been the case since 2010, a competition was held among the 442 JRCS facilities, with prizes awarded for the most effective communications activities. This annual award ceremony provides a valuable opportunity for JRCS employees to meet with those from other facilities and celebrate their achievements together while sharing ideas, generating a feeling of solidarity across the organization as well as strengthening communication ties. Another activity, held annually since 2010 on International Red Cross Day (May 8th), is the decoration of one of the most famous fashion streets in Tokyo with Red Cross flags alongside the JRCS slogan, born out of the campaign, which roughly translates as “Together for humanity.” Under these flags, JRCS employees played a key role on the day in 2012, engaging in PR activities such as instructing members of the public how to perform emergency first aid. The ongoing campaign resulted in more eye-catching and appealing Red Cross content, combined with more effective approaches to the media that generated a large number of earned media portraying the organization in a positive light. Five years ago the JRCS’s activities produced only 987 placements, but during 2012 the number increased fivefold to 4,925. The campaign also had a significant impact in terms of increased donations, as total donations via bank transfer increased from a monthly average of 15.87 million yen in 2008 to 30.57 million yen in 2012. Moreover, 97% of staff members surveyed evaluated “Spirit of Togetherness” as effective in improving the communication capacity of the JRCS. Since April 2012, the “Together for humanity” slogan has also been featured in the government authorized Japanese language textbooks of junior high school pupils, having been introduced as a key example to encourage young people to actively help each other.