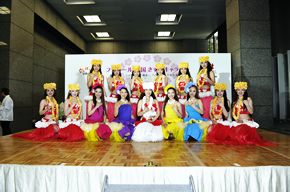 Among the casualties of the largest recorded earthquake in Japanese history and the subsequent catastrophic tsunami was Spa Resort Hawaiians. For decades a favorite leisure destination for Japanese of all ages, the resort in Fukushima Prefecture’s Iwaki City is just 50 km south of the crippled Daiichi nuclear power plant.

Created in 1965 to revitalize Iwaki by Joban Kosan after the closure of the coal mine , for Japanese the Hawaii-themed hot spring resort came to exemplify what small communities can achieve when facing crisis. In recent years visitor numbers topped 1.5 million annually. Of all the resort’s attractions, the ‘hula dance’ performance was by far the most famous, and popular. In an aftershock from the March 11 earthquake, the resort itself was damaged and forced to close for repairs, affecting thousands of local employees, service providers and suppliers. The share price of resort owner Joban Kosan tumbled. On a wider social level, the nuclear fallout badly tainted the reputations of Iwaki City and Fukushima.

PRCD devised a CSR campaign leveraging the resort’s famous hula dancers that symbolized the determination of Spa Resort Hawaiians and Iwaki City to recover from the disaster. The campaign, still in progress, has already created considerable media buzz with around 30 performances (at the time of writing, 100 total planned), cheered up the depressed Fukushima people including the resort’s employees, and resulted in the client’s satisfaction.

Japan’s decades-long love affair with Spa Resort Hawaiians was rekindled afresh with the 2006 film Hula Girls that tells how a mining town recovers through the spirited efforts of its young women and the launch of a Hawaii-themed resort after the closure of coal mines.

The need for a similar revival in Iwaki became crucial immediately after the quake and power station fire when radiation fears decimated sales of Fukushima products and savaged tourism, both key economic drivers.

The closure of Spa Resort Hawaiians – an integral part of the local economy – coupled with the nuclear threat and profound sense of loss that followed the disaster, left many feeling despondent. Joban Kosan wanted a communications campaign to inspire hope in its employees, the town, and the rest of Japan.

Within a week of the quake Joban Kosan approached PRCD, its agency of record. Immediately we undertook a detailed audit of print and electronic media to learn how the resort was viewed, its perceived community role, its economic importance, and the feelings consumers held for it. Spa Resort Hawaiians was a human interest, entertainment and business story, and positioning that story for maximum media attention was crucial.

The audit confirmed that the hula dance troupe was the resort’s most powerful symbol, as the 1965 hula troupe was still in the minds of many Japanese. Thus, PRCD created a campaign around a national tour of hula dance performances themed kizuna (or bond) and presented the beautiful, hard-working dancers as symbols of Japan’s reconstruction. Local and central government involvement would elevate the tour to social movement status and attract media support.

With the advice of the agency, the client gave an interview with Japan’s mass-circulation Asahi Shimbun, which on April 4 splashed news of the first nationwide hula dance tour starting in 45 years. Other electronic, print and online media, desperate for a ‘feel-good’ story after weeks of reporting horrific death and destruction, immediately seized the news. Venues nationwide clamored to host the dancers, some promising to waive charges. One example of the spillover effect was Yahoo! Japan landing page (most visited Japanese language site on the Internet) syndicating the story, which created a buzz on twitter.

The media frenzy proved that the hula angle was an inspired choice for the campaign. Now interest in the resort had to be sustained until its reopening (expected in autumn) and then maintained for the resort’s longer-term survival. For its business year to March 30, Joban Kosan had posted a ¥559m ($6.9m) loss.

Because of the fluid situation at the Fukushima Daiichi nuclear plant, the aftershocks (1330 between March 11 and June 20) and uncertainty of government policies, even though the agency created an overall campaign plan, it was necessary to check the daily status of the news and make new proposals based on the needs of journalists. Activities were planned on an ongoing basis, some only the day before implementation.

Media Coverage (Instances of) from the announcement of the tour until June 27:
Japan – TV: 89 Newspapers: 314 Websites: 600
The client was extremely satisfied with the quality of the media coverage. Due to the positive PR angle of “lifting spirits” and bringing smiles to the faces of people across Japan, there were 432 instances of mainstream print media coverage in which the spirits of Joban Kosan employees, disaster evacuees and the general public were said to have been lifted.

The SRH dance troupe was invited to perform at a charity dinner for the Foreign Correspondents’ Club of Japan on July 4, showing that their efforts were still a “hot topic.” On April 4, the day of the Asahi Shimbun’s splash on the dancers’ return, Joban Kosan’s stock price jumped to ¥109 from ¥79 to reach the Tokyo Stock Exchange’s daily limit up. After being a ‘sell’ for it instantly became a ‘buy’. Though the stock has since retreated, it remains robust thanks to continuing positive media reports. Also notable is that the stock price is still stable although the resort will be closed for at least a half year.