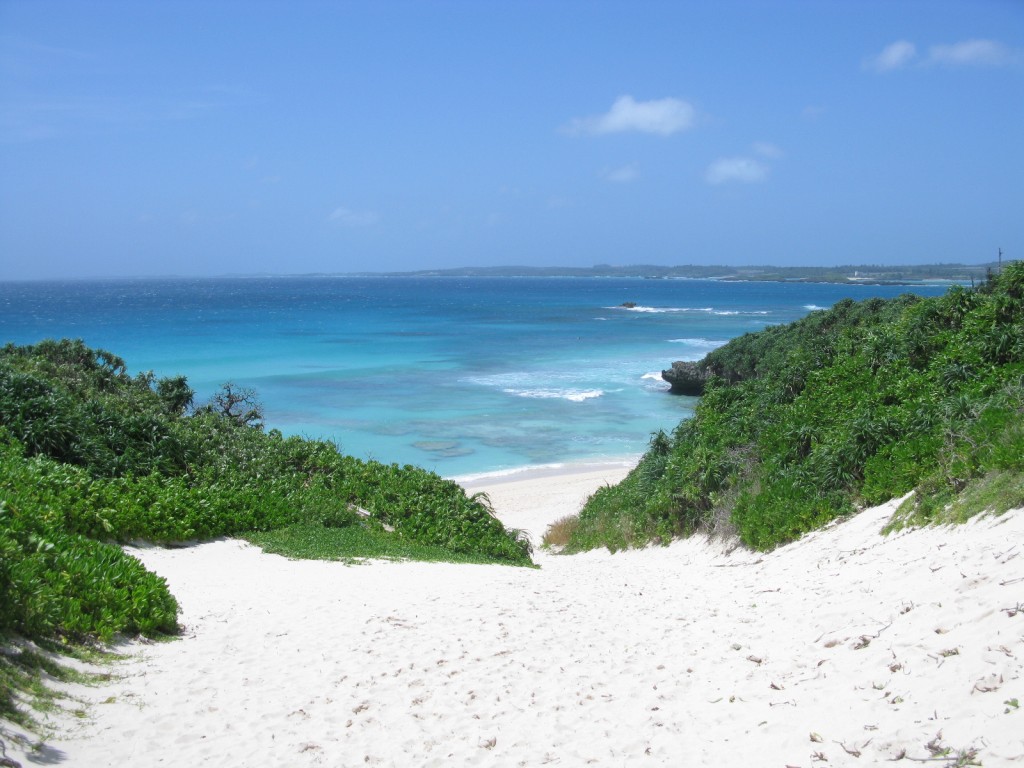 Miyako Island in Okinawa Prefecture in southernmost Japan spans 160 square kilometers of pristine beaches, stunning coral reefs, and undulating hinterland. In summer it’s a popular destination for sun seekers and water sports enthusiasts but in Japan’s cooler winter months, visitor numbers decline – from over 40,000 per month to less than 30,000 – dealing a blow to the island economy dependent on tourism. Local businesses suffered further in 2014 when the Orix pro baseball team ended a 22 year-association with Miyako by deciding to hold its spring off-season camp for the first-stringers in Miyazaki on Kyushu, drawing away thousands of Orix fans who travel to watch the training in February. The Miyako local government sought to lure out-of-season visitors without relying on the island’s traditional attractions of sun, sea and sand. Besides its scenic beaches, Miyako with its rich cultural heritage and fascinating history has much to offer tourists. It was these little-known attractions the agency selected as the focus of a unique campaign promoting Miyako Island as an Indiana Jones-like adventure holiday destination.

The campaign aimed to boost the appeal of Miyako Island to tourists during the off-season, in particular in January, when the weather is unsuitable for a beach vacation. This would boost the economy of the island, for which tourism is the main industry. Furthermore, making the campaign distinctive and engaging would attract wide media coverage and help to raise Miyako’s profile among the Japanese public.

The campaign targeted general consumers, particularly young urbanites in their 20s and 30s for whom an outdoor, adventure-style vacation would most appeal.

The agency conceived an event that would realize co-storytelling with the target audience who would then spread Miyako Island’s attractions through their own stories of participating in the experience. For this initiative, the agency drew upon on the island’s potential as an adventure-packed paradise imbued with a fascinating culture and little-known historical ruins. However, to communicate this, a paradoxical approach was taken in which the whole island was figuratively “shut down” and escape made supposedly impossible. The reasoning behind this seemingly drastic tactic was to transform Miyako Island into a hands-on adventure destination with the unique positioning of “the Shut-down Island” from which nobody can leave until hidden puzzles are solved. The plan would turn both the tourists and local islanders into explorers, getting them to examine cultural offerings and search through historical sites such as the tomb of local chieftain Tuyumya Nakasone for ‘clues’. In the process of solving the mystery and winning passage off the island, the explorers would discover its less-visited attractions and tourist sites. They would then spread word of their fun experience on Miyako via social media, sharing views of their visit and the discoveries they had made. The idea to “shut down” or close off the island to boost its wider appeal was as daring as it was incongruous and yet it worked. The inspiration came from the online game “Crimson Room” which obliges players to solve clues to escape from a room and enjoyed great popularity among young Japanese in the mid-2000s. These “Millennials,” now in their 20s and 30s, were thus identified as the main target for this real-life version. Materials were developed for the search around the island, including a special edition of the local newspaper containing a map and the questions participants must answer. Eye-catching posters were also designed for each of the two initiatives in 2014 and 2015, emphasizing the mysterious nature of the “Escape from the Shut-down Island” challenge.

Both of the annual events took place over the course of four to five weekends in January/February.
With no advertising budget to promote the project, publicity campaigns were extensively used to disseminate news of the challenge to the target audience. This began a few months beforehand in November, when a high-impact news bulletin “Miyako Island shut down!” was released to draw public attention to the island ahead of the usual winter off-season. Various travel companies and an airline supported the promotion.

On reading the story and learning the true reason for the ‘shut down’, people were invited to sign up to participate in the “Escape from the Shut-down Island” challenge. Once on Miyako, participants used the map to visit locations for clues to answer a series of questions. Three ‘Clue Cafés’ were also opened in 2015 around the island offering help with the answers as well as a bar for finishers to share their experiences offline. Visitors who solved the mystery were presented with a commemorative certificate and allowed to ‘escape’ back home to share their adventure vacation memories with friends and social media contacts. The results of a survey published in October 2014 by the Brand Research Institute, Inc., found that Miyako Island’s ranking among Japan’s “most attractive” regions rose from 34th in 2013 to 19th that year. Although tourist numbers decreased in January 2014 from 2013, the campaign still attracted 2,921 adventurers – triple the number expected – who injected about US$2 million into the island’s economy. Those who took part had an overwhelmingly positive experience, with nearly 90% each year saying they were either “satisfied” or “very satisfied”. The total number of tourists in January 2015 also rose to 29,797 from 27,324 the previous year. Moreover, the February 2015 total increased even though the Orix first-string baseball players were training elsewhere. Overall tourist traffic climbed in FY2014 ended March 2015 to an annual record of 430,550 from 400,391 the previous fiscal year. The ‘Shut-down Island’ challenge garnered wide coverage including on national broadcaster NHK and in Sports Nippon, one of Japan’s largest-selling daily sports newspapers, as well as popular websites like Huffington Post Japan. Word of the event reached 7.5 million users based on Twitter users. The Miyako Island authorities were so impressed with the campaign’s success that a dedicated department has been created to handle tourism events.