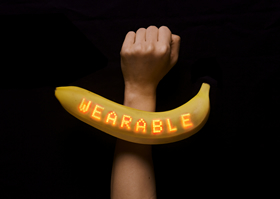 As a sponsor of the Tokyo Marathon since 2008, Dole Japan, Inc. had built a close connection with the event and helped establish bananas as a great food for runners. However, the company wished to distinguish its brand further from its rivals in Japan’s crowded banana market, as well as highlight the fact that its bananas had superior nutritional benefits for sport. To achieve this, with the support of lead agency Dentsu Y&R and PRCD, the company took inspiration from the growing wearable tech market to invent the “Wearable_Banana” for Tokyo Marathon 2015, a device with a practical use for runners as well as a powerful PR message.

The Tokyo Marathon is the largest marathon race held in Japan, with over 36,000 runners participating from around the world. Dole signed up to become a sponsor for the 2015 edition of the race, its eighth straight year doing so, and sought to promote their nutritious bananas, aimed specifically towards the marathon participants.

Bananas can be digested quickly and are a well-known energy source for runners, but the banana market in Japan is competitive and crowded. Dole’s bananas have an advantage, however, in that they are high in potassium and citric acid compared to other brands, which helps the marathoners recover faster after the race.
The goal of the project was to create buzz around Dole bananas among those running in Tokyo Marathon 2015, while also making runners aware of Dole bananas as a nutritious energy supply, ideal for sports, in an over-crowded banana market in Japan, all through organic PR. The effect was to be measured by the target population reach in Japan through total worth of media coverage. The growth of Dole banana sales would be a secondary measurement.

According to research results announced in October 2014 by Yano Research Institute, one of the major marketing research companies in Japan, the wearable device market in Japan grew from 533,000 in terms of the number of products shipped in 2013 to an estimated 2.75 million in 2014. Looking specifically at smart-watches, the figures were 200,000 in 2013 compared to an estimated 1.54 million in 2014. The wearable device market is forecast to keep growing in Japan, with over 13 million items expected to be shipped by 2017, of which around 7 million will be smart-watches.

Wanting to stand out as a banana brand in the running world, Dole specifically targeted the participants of Tokyo Marathon 2015. The target audience was mostly new. Although most runners would have already been aware of the Dole brand name, they were likely less familiar with the company’s sports bananas aimed at marathoners, which are high in potassium and citric acid.

The campaign was designed to get the marathoners to notice and actually taste the Dole banana during the race. Dole needed to directly reach and attract their target audience on the spot, and maximize news to reach further through coverage on TV and other media channels.
Recently, the running world has changed dramatically with “wearable” tracking devices. To finish a full marathon, recording all running data is essential. Also, Apple had just announced that the Apple Watch would be released in early 2015. These insights all contributed towards the development of a unique “wearable” Dole banana especially for runners.

Dole managed to secure permission to use its specially made “Wearable_Bananas” in the actual Tokyo Marathon race held on 22nd February 2015. However, owing to security reasons, use was limited to two devices. The “Wearable_Bananas” were made fresh in the morning and strapped around the runners’ wrists just before the marathon started. They were made by cutting open a real Dole banana, and removing the fruit, before inserting thin micro LED chips, batteries and a slightly smaller Dole banana back inside the peel. The marathoner’s race time, heart rate and real-time support messages from Twitter were displayed on the banana peel. The banana was also designed to transmit special messages to let runners know when refreshment stops (in other words, banana-eating stops) were coming up on the course. And once the banana fulfilled its role to help the marathoner cross the finish line, it could then be eaten as it was meant to!

The two runners with “Wearable_Bananas” attached to their wrists both managed to finish the marathon before finishing off their unique wearable devices. The bananas provided not just race data but also potassium and energy! While the experiment showed that the “Wearable_Banana” could be used as a functional and practical device for runners, more importantly it also demonstrated that Dole bananas are the perfect solution to recover from race exhaustion.

Comments from the runners such as “The cheers on the Dole banana kept me going!,” “It’s everything a runner needs!” and “And it’s amazingly delicious!” were broadcast on multiple national TV programs. The Internet also went bananas for the story and the video was accessed from 178 countries, receiving comments such as “Forget the Apple Watch!” and “The World’s First Smartfruit!” Aside from major international news outlets such as The Wall Street Journal, Huffington Post and Bloomberg, the story garnered wide coverage on both tech-focused sites like CNET and Yahoo Tech and sites for runners like Runners World.
Media impressions totaled more than 45 million in Japan alone. The brand image of Dole was also boosted 67% according to a target audience survey. Sales of Dole Bananas shot up 193% in the first week after the event compared to the week before the event, thanks to the “Wearable_Banana”