The integrated media model strategy called PESO (Paid, Earned, Shared, Owned) appeared in the PR world around 2010. Its concept is that PR practitioners are managing information distribution across the board—not only in relation to news media, but also in advertising, owned media, and social media. When brand journalism later started gaining attention, more emphasis was placed on going around the news media to deliver stories directly to targets, and owned media became more important. In normal situations, information on SDGs and other brand news can be delivered directly to consumers through owned media. PR practitioners can control the information they want to share, and they can tell the story they want to tell in the way they want to tell it. However, when “real news” occurs (such as risks and crises), PR practitioners inevitably have to confront the news media.

With fake news and false and misleading information also flying about, trust in the content produced by professional journalists continues to increase. Despite how much its importance has changed during the history of PR, getting the news media to convey information on companies and brands as trusted third-party content is still one of its core functions. As the way people consume media and information shifts, and journalism adapts to that shift, how will media relations change moving forward? This article will discuss the future of journalism and media relations based on advanced global media trends.

The Shift in Information Consumption

As smartphones started gaining popularity in 2011 and social media use spread, information consumption changed dramatically in many places, including Japan. The biggest change came in March 2013, when it became possible to use the internet on mobile phones from within trains while traveling on all lines of both the Tokyo Metro and Toei Subway. Mobile phone use also became possible within all sections of the Osaka Metro in March 2014, the following year. With this, being in the subway no longer meant being out of range. How did technological evolutions and social infrastructure development impact journalism? People who had been reading paper newspapers on their commutes started turning to their smartphone screens instead. According to a Japan Press Research Institute survey from 2017, 71.4% of people read the news online. This was the first time that number surpassed the number of people (68.5%) that read the morning newspaper.

Without even subscribing to any newspaper, the news that would be on the front page of the morning edition started to be available for free on Yahoo! News from around 6 a.m. Despite some articles containing paid content, this availability created the assumption that news is free. As that happened, the trend of several similar articles appearing simultaneously in numerous places also began. These factors led to further commoditization of straight news reported by major media outlets. In addition to less copies being printed, the commoditization of news has also reduced newspapers’ value as both advertising media and news media. The Japan Newspaper Publishers & Editors Association has reported that the peak of total newspaper sales was 2.4188 trillion yen in 2005—that same figure came to 1.4827 trillion yen in 2020, showing that sales dropped to 61.3% of what they were during its heyday.

Foreign global media companies that are moving forward with digitalization and globalization are the only ones that have not yet suffered any financial distress or have only been slightly hit by the COVID-19 pandemic. America’s New York Times is one such example. The newspaper had over 8,000,500 paid subscribers to its digital edition at the end of 2021—it has moved forward with the digital-first and subscription-first concepts, transforming from a regional US newspaper into a global media outlet. The UK’s Independent stopped printing paper versions in 2016, and the Financial Times (FT) and others have followed suit. In a March 1 press release, FT noted that it had surpassed 1 million paid subscribers to its digital edition alone. FT originally aimed to run its business without influence from advertising revenue—which fluctuates with economic trends—but they chose to focus on gaining subscribers to their digital version, and now over half of their subscriber base is located outside the UK. FT is putting its efforts into both improving management and revamping content creation in order to prevent revenue loss from the commoditization of news.

From Straight News to Analysis Articles

FT’s Tokyo Bureau Chief Robin Harding had this to say: “Currently, FT’s online articles have to be either short or long, or no one will read them. Readers either want to get important news as fast as possible or to look deeper into specific issues. So, we’re trying to write short news articles of about 500 words or feature articles from 1800 to 2000 words. No one is reading the ones that are between 800 and 1000 words. At that length, the article is too short to get deep into an issue and too long for readers who are just browsing to finish.” We can also see from online article page views that FT’s analysis articles garner the most views of everything it posts. The demand for straight news (which simply says what has happened) is also still high, but for newspaper companies, analysis articles—which can’t be copied easily by other companies—are more valuable.

PR and journalism have a give-and-take relationship. The source of a lot of the news reported by the media is information provided by PR practitioners through press releases, press conferences, and so on. In order to make mutually beneficial contributions in this codependent relationship, PR practitioners must become commentators who can understand and explain context, meanings, etc., rather than simply delivering the facts of products and services to the media. Additionally, it’s key to provide data that can contribute to analysis articles.

FT is also trying to revamp its content with another goal in mind: promoting diversity. The company holds an internal hackathon yearly to produce new products. At the 2017 hackathon, a bot called JanetBot (see Photo 1) was developed to increase engagement with women. Every 10 minutes, the bot checks the genders of people displayed in online article photos. This idea was originally born from readers’ feedback stating that there were too many photos of men in suits in FT articles. The hypothesis was that if more faces with female attributes were represented on the paper’s page, female readers’ engagement would go up. The bot was named JanetBot to pay homage to Treasury Secretary Janet Yellen, as over three images of her were posted on FT the day the bot’s prototype was finished. The following year, FT announced another bot called ‘She said He said.’ This bot checks pages’ gender balance by using names to determine the gender of columnists, etc. According to FT, these tools check whether pages are including female voices.

Photo 1: JanetBot determines the gender of people in posted photos 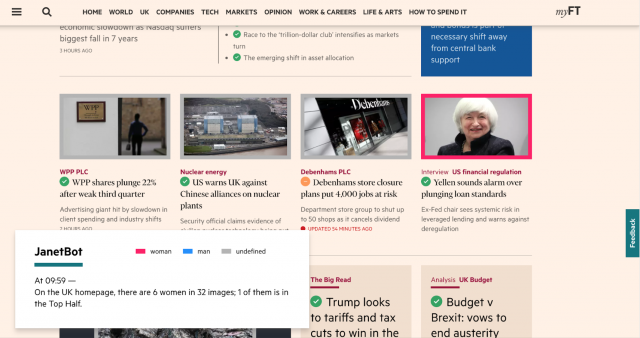 Image courtesy of the Financial Times

Diversity of Reporting in Japan

On the topic of diversity in reporting, the World Association of Newspapers and News Publishers (WAN-IFRA) released A Gender Balance Guide for Media in April 2020. While the Japan Newspaper Publishers & Editors Association is a WAN-IFRA member, it doesn’t seem like the kind of initiative that FT is taking—using technology well for diversity in reporting—exists yet in Japan. Despite this and the fact that the population of journalists is decreasing as a whole, the proportion of female journalists has increased from 10.6% in 2001 to 23.5% in 2021, according to The Japan Newspaper Publishers & Editors Association (see Table 1). There are still very few women in management, and the decision makers that set editing policies are still largely male, but diversity does seem to be increasing on the reporting side. Reporting from various viewpoints is increasing readers’ engagement and media is also headed that way, so PR practitioners must also keep that in mind. The perspectives of personnel from different backgrounds should be included when planning and implementing PR campaigns, etc. Also, spokespeople, opinion leaders, and others that are conscious of diversity should be used to promote media relations. Diversity is about more than just gender balance: we must also pay attention to sexual minorities, people with disabilities, people of different races, and so on.

Table 1: The number and percentage of female journalists working for newspapers and news agencies has nearly doubled in the past 10 years

How can we interact with the changing international media?

We as journalists want to say what things mean rather than what happened. To do this, we need to know why something’s happening, rather than just what’s happening. In order for us to gain such understanding, journalists and PR practitioners need to have deep conversations. 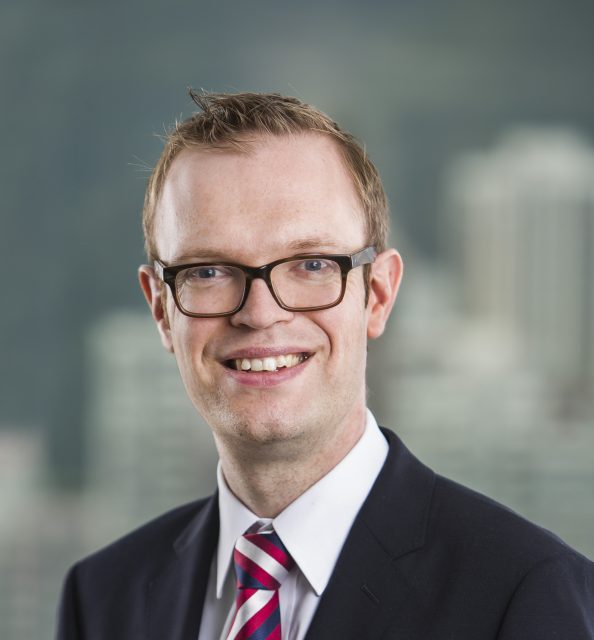 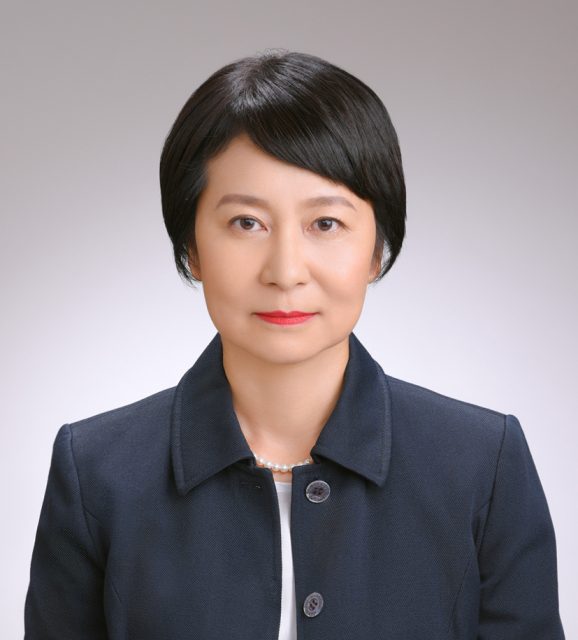 Kyoko Fujii
She is the in-house PR manager for PR Consulting Dentsu Inc. Her English book explaining PR in Japan to practitioners abroad, Communicating: A Guide to PR in Japan, won an IPRA Golden World Award.